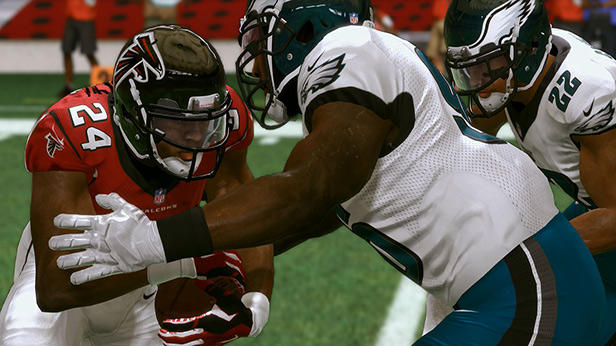 Madden NFL 17 releases this year with many improvements. One of the developments that EA Sports introduces with this installment is a newcomer-friendly running game. It seems to be the final addition to make Madden game series even more approachable.

These improvements started when in Madden 15 defense was indicated as a fun feature. So Madden 17 seems to be aimed to preserve the similar look and feel as ball carrier and running backs will take an advantage from an analogous tips system. In the upcoming Madden NFL 17 ball carriers have visual information which let them know where the ball will end up, depending on your present trajectory. It is important not to mix it up with a hint system as it tells you where you should go. These features are made to train newcomers the true art of playing football. That is why in the Rookie and Pro difficulties you can’t event have a hit button at all while you are running.

It is known that EA Sports wanted to make Madden NFL 17 one of the most accessible of all the Madden series games. Executive producer, Seann Graddy explained: “It’s absolutely a conscious decision. One of the things we hear consistently is that Madden is a hard game to get into. The knowledge and culture of football is intimidating to many. It is also a chess match. There’s the difficulty of the UI, the mechanics, and snapping of the ball. Over time you’ll gain the muscle memory so you won’t have to rely on these guides and prompts. The goal is to open up running to people who are too comfortable with the passing game.”

EA Sports also are working on the Madden presentation. Former NFL Films producer Brian Murray is in the team, taking control of the franchise’s broadcast TV visual characteristics. Madden 17 will have not only new pylon camera and improved zooms but also a multi target camera to keep an eye on key events. This will let you watch post-play videos in Madden NFL 17. There is something amazing on how EA Sports transforms traditional television and it seems not to be the end of evolution as well.